In advance of the release of “I Give You My Home” in its filmed form, Guerilla Opera will have an educational presentation on Rose Standish Nichols and her life, hosted by the Haverhill Public Library on February 15th. Both the movie and the CD will be out in March!

Revision – looks like another session on March 16th at 3PM…

Video of the live performance of “I Give You My Home” this past June – tickets available through Guerilla Opera’s website, with a pay what you can ticket range..https://www.instagram.com/reel/ClZPCPHjWHW/?utm_source=ig_web_copy_link&fbclid=IwAR3OSqK2hfhHbe8KTzHIxOA3t8seC2efoBjQNE9LER3npucreAGLvSW-UFc

The Sebago-Long Lake Music Festival (https://sebagomusicfestival.org) will have its 50th anniversary concert from this past July on Maine Public (radio and online) tonight. The concert features the work commissioned for this anniversary, “The Lake Guide” for mixed septet. The premiere at Deertrees theatre was quite the event, and everyone involved is looking forward to the broadcast tonight.

Only hours until the broadcast. Can’t wait!

EXCITING NEWS! LISTEN WITH US!The First Concert of our 50th season will be broadcast on Maine Stage on Wednesday, November 23, at 8:00 p.m (Thanksgiving Eve). The concert includes The Lake Guide, a piece commissioned by SLLMF to commemorate our 50th anniversary. We are so proud of it. Written by Beth Wiemann, a music professor at UMaine-Orono, she is an accomplished composer whose works have been performed around the U.S. and internationally by a number of well-known ensembles.So, if you are hearing this concert for the first time or you heard it this past summer, enjoy it with us on Maine Stage on Wednesday, November 23rd.The Program was performed at Deertrees Theatre on July 12, 2022:DONIZETTI: Trio for Flute, Bassoon and PianoBETH WIEMANN: “The Lake Guide” (2021), commissioned by the SLLMFBEETHOVEN: Septet in E-Flat Major for Winds and Strings, Op. 20Artists: Laura Gilbert, flute; Benjamin Fingland, clarinet; William Purvis, horn; Adrian Morejon, bassoon; Min-Young Kim, violin; Matthew Sinno, viola; Mihai Marica, cello; Jered Egan, double bass; and Mihae Lee, piano.Click here to find your Maine Public Classical station: https://www.mainepublic.org/where-to-hear-maine-public….Listen online at https://www.mainepublic.org/classical-music.

A new septet commissioned for the 50th anniversary of the Sebago Long Lake Music Festival in the “lakes region” of western Maine. Great players:

Each movement has some element depicting activity on or in the water. The first movement features the piano part continuously “rowing” underneath the rest of the ensemble. The second movement floats on the surface, constantly moving, but slowly. The last movement has the piano part “diving in,” but its energy contrasts with the soft, murky sounds from below the surface. Excerpts from each movement can be heard on Soundcloud – here’s the opening of the final movement:

It was quite an experience to hear the core ensemble of Guerilla Opera perform the piece at the Nichols House Museum on Beacon Hill early this month. Intense, impressive and so musical. And Aliana was in suffragette white for all the shows!

There will be another whole version of the piece, a film shot on locations throughout New England, coming in 2023 – along with an audio recording. More info to come….

Here’s the info on the chamber opera first fully staged performances in Boston..

I Give You My Home – Wiemann

A new piece for Guerilla Opera, hosted by the Nichols House Museum, and some background in this Beacon Hill Times article – 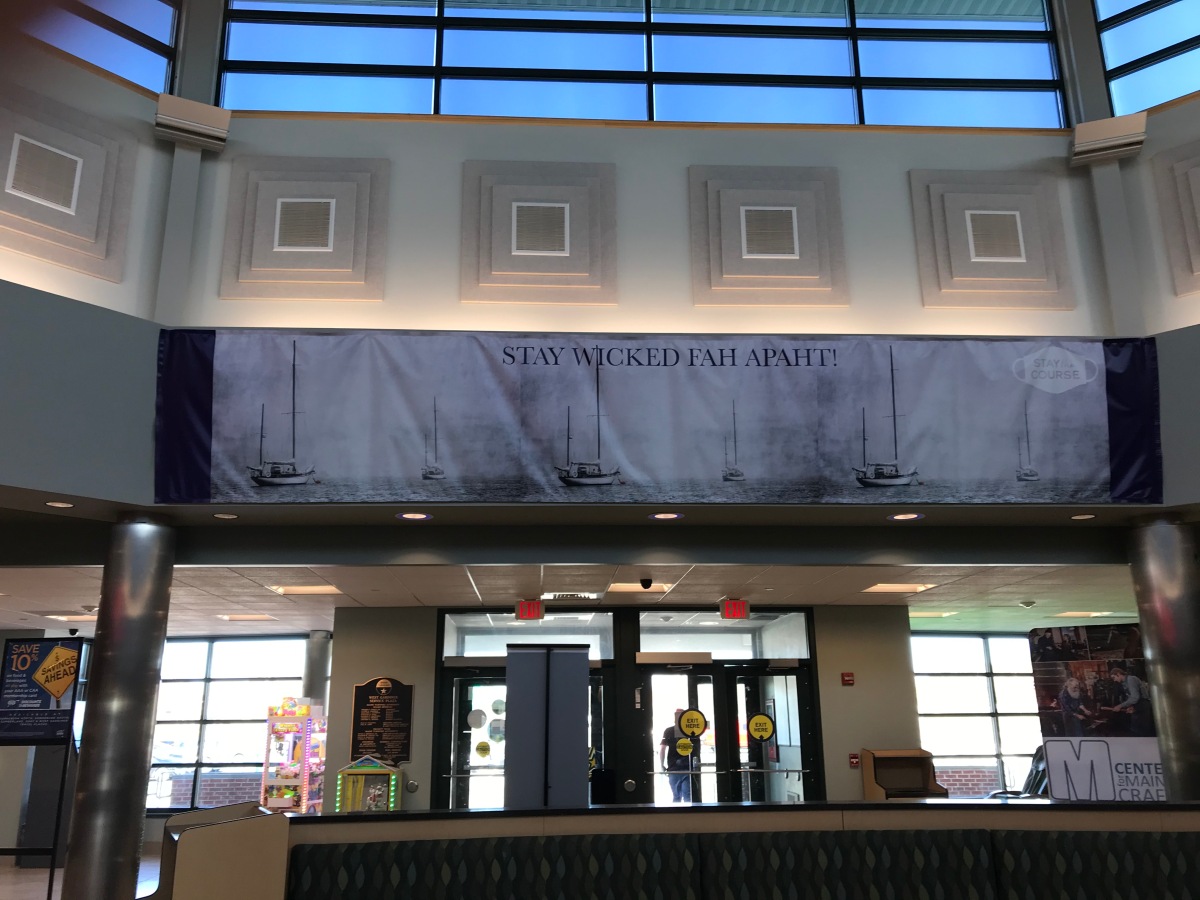 Husband Davy bought a new car in February, after planning the purchase for awhile. He filled the tank after leaving the dealership. He has just refilled the tank, and it’s mid-May.

Being on leave this year, I did lose the 8 hours of weekly driving going back and forth to Bangor to teach, but that driving got replaced by some serious mileage to gigs further away than usual. So, I still had the experience of here-I-am-in-the-car-can’t-be-productive-so-podcasts! Particularly in the late fall and early winter.

My welcome to northern Georgia after driving 11 hours in December..

But of course, everything planned post March 10 has been cancelled, put on hold, or made virtual in whatever way it can be.  I’m lucky in that freelancing is a pretty small part of my financial life, and so compared to many musicians my own work life has been more continuous and less scary (though who knows what will happen with state universities over the next few years..).

The projects I’d planned on working on are still there, and I can work on them just fine being here. And only here.

But the way I use what used to be “down time” feels different. While I listen to podcasts, there’s a sense that I should be doing something more out of the box, something I would not have done in pre-COVID times. My attempts so fair have verged on the silly – drafting a comic scene about interior designers in a pandemic (which is now on the back burner, as it’s not funny enough yet) and really silly –   bought some roller skates and started to work out how not to fall down. Falling while skating feels like falling from a greater height than you’d think. Not sure this exercise will become a real routine, and it’s certainly not something I can do simultaneously while listening to NPR podcasts explain things to me, at my current technical level (i.e. working on not falling down). 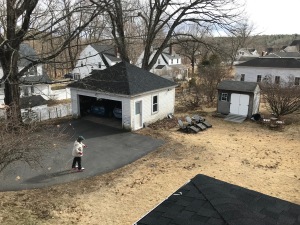 The driveway can be a dangerous place.

The podcasts that I would normally use to get away from work are of course built by people who are now also distracted by the current weirdness, and so they are not as much of a vacation experience as they used to be – not a dig, just an observation.

I’ve also turned more to the smaller projects that have popped up instead of spending more of the available time on the larger plans I already had for the spring. It does feel productive to be able to check off something as finished, even when it’s small.

A few of these projects were part of the new COVID19 world of compilation videos. I played on a couple of these, and appreciated that the instructions given by both ensembles were clear and accessible to most musicians with the equipment they already had. One of these compilations is still in process, but a short Mozart piece lead by Hugh Sung was one of the first out on YouTube after everything shut down.

School also wanted some “content” to keep people engaged from afar, so I wound up making a short clip for the McGillicuddy Humanities Center at UMaine, which was connected to one of my own medium-sized projects. Two birds with one stone there.

And I did actually finish that project in April, so perhaps the video helped push that along.

The most fun of the smaller projects was an adaptation of Eve Beglarian’s piece Play Like a Girl. Eve has a few variations of this work, mainly for piano, percussion, or toy piano and combinations thereof. I started with one of the toy piano variations, changed registers for the clarinet, and added some reverb to get the harmonic sustain that the toy piano would have had naturally. I think it turned out well, and Eve put it online this month as part of her Book of Days project:

There have been other things for school (videos to replace now-closed summer music camps programs, etc.) But now it’s time to get back to the bigger projects that I let slide for a few weeks. I’m going to use a virtual mentor to help, from the new version of Project Runway – a virtual positive influence:

“I am living for Christian Siriano saying “You are *killing* me” about all the blue tulle on Project Runway.

The semester is over, June wrap-up duties in the department are done – time to get going on some projects that have spent the year waiting to go on the front burners.

The big job I’ll be doing this coming year is a full revision of the chamber opera UNTIL THE WAR IS OVER, based on H.D.’s novel Bid Me to Live. The librettist, Jennifer Moxley, and I have had a few opportunities over the past 5 years to see/hear sections of the opera done in a bunch of settings (recording sessions, staged readings, semi-staged workshops), so that we now have a better sense of what works and what needs to go.

When Jennifer and I returned from the John Duffy Institute for New Opera in 2017 we had it in mind to look at Scenes 1 and 4 in particular. Those scenes between H.D. and D.H. Lawrence came across not so much as conversations between characters, but as characters talking past each other. This is something that we originally thought of as a feature, not a bug, but we ultimately were missing out by not showing what drew those two writers together in the first place. Jennifer has worked on the dialogue so that the origins of their relationship can be heard underneath their arguments about poets and poetry, and now it’s time to sort through how this will work musically.

I’d also noticed that some of the instrumental textures needed to be cleared out so that the singers could have more direct support for their work onstage. The clip below shows the current form of an exchange between H.D. and her husband’s mistress –  a section that got streamlined during revisions last winter, which makes me optimistic about other revisions to come.

One of the mentors at the Duffy Institute warned us that making small changes throughout the piece would be complicated – pulling on a thread could wind up destroying the sweater. But I think the effort will be worth it; we just have to keep track of all the versions somehow in the process.

Revising the piece seems even more worth doing after I watched the “Director’s Cut” of Amadeus recently. This version is 3 hours long, 20 minutes longer than the theatrical release, and none of the additional 20 minutes helped the story. (It did make Salieri more evil, and so more one-sided. Mozart was simplified too, becoming even more of a brat than in the Best Picture version.) The added length here, which was actually the original cut, gets you more period costumes, longer descriptions of court maneuvering in Vienna, and apparently, something closer to the original play. The editing done back in 1984 for the theatrical release did away with the sometimes crude “explanations” behind each character’s actions. So the characters actually got more interesting to watch. You know, less is more.

(It’s harder to find the theatrical release now – the Director’s Cut is the one shown now at fundraisers and such.)

(We know, Salieri likes sweets. We get it. But it’s pretty?)

All of this recent thinking about the editing work ahead has been colored by the death of my main teacher from graduate school, Peter Westergaard. Peter always put clarity first: in his composing, in his writing about music, in his opera libretti and translations. He thought that talking about musical style was a waste of time (not specific enough about how a piece works, basically not serious), even though from my perspective he had a strong individual style himself. The piece below from 2007 uses the imitative counterpoint and rolling triplet rhythms that I recognize from many of his works, which some might call part of his style. His take would be that those elements made his melodic and harmonic moves more transparent, easier to hear. Part of being a good composer, not a stylist. And a good editor.