I should have known that after writing a clarinet duo last month, I would wind up not writing for my own instrument for a while. It was great to compose a piece for the AdZel Duo, and play through all of the music myself (granted, to really hear the piece I had to overdub myself, but still.) Even when I compose for other instruments, I often play through single lines on the clarinet or bass clarinet, because it’s the closest I can really come to singing through the melodies. So, writing the duo felt very efficient in addition to being fun. 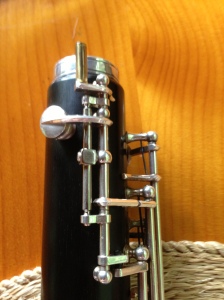 After that draft was done, the Vermont Symphony sent word on the exact instrumentation of the piece for the Made in Vermont tour next fall: flute, 2 oboes, 2 bassoons, 2 horns and strings.

OK, not the end of the world, but I had already composed a draft of three quarters of the piece with a “provisional orchestration” with single woodwinds. Including clarinet. Which of course had several solos. Probably most of the solos, come to think of it. And now, I was given an early-Haydn-style orchestra, without the instrument that is my home base. So, time to rethink.

Not that I am unbiased, but the clarinet does have some real advantages in an orchestral woodwind choir. It has a range that covers a lot of ground, and the dynamics aren’t so closely aligned with extremes in range. Its timbre doesn’t change as much with register changes – and while that can make it seem bland in comparison to the other winds, it’s very useful when filling out harmonies. Without it, the different voicings in the wind choir are much sharper, and what would normally be the middle register of the choir is now really low for some of the instruments and fairly high for others. Having the horns in there helps, having a round sound in that middle register, but those instruments don’t change registers without drawing attention to themselves – they immediately become soloists when they have large leaps in a line.

Ultimately, I bulked up the horn writing within all of the harmonies, and dovetailed all of the wind parts with overlapping segments. Which means that now, almost none of the original melodies appear in just one instrument; everyone is sharing the tunes all the time, with very few real solos. This has made the wind writing more conversational, and the colors change a lot more from bar to bar, which will make for happier players overall. It’s also arguably more like Haydn, and given that the piece will share a program with a Haydn symphony,  “when in Esterházy…” is probably the best plan.

Now, on to making piano reductions for the first three scenes of the opera I’m working on with Jennifer Moxley. So, still no clarinet, and now I have to take what are really woodwind lines and give them to an instrument that can’t swell on single notes.