The semester is over, June wrap-up duties in the department are done – time to get going on some projects that have spent the year waiting to go on the front burners.

The big job I’ll be doing this coming year is a full revision of the chamber opera UNTIL THE WAR IS OVER, based on H.D.’s novel Bid Me to Live. The librettist, Jennifer Moxley, and I have had a few opportunities over the past 5 years to see/hear sections of the opera done in a bunch of settings (recording sessions, staged readings, semi-staged workshops), so that we now have a better sense of what works and what needs to go. 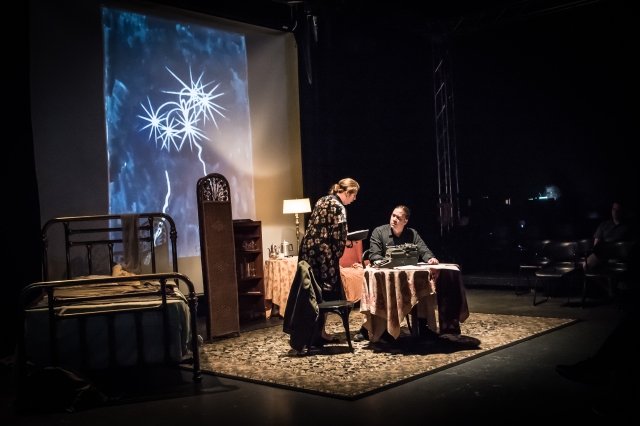 When Jennifer and I returned from the John Duffy Institute for New Opera in 2017 we had it in mind to look at Scenes 1 and 4 in particular. Those scenes between H.D. and D.H. Lawrence came across not so much as conversations between characters, but as characters talking past each other. This is something that we originally thought of as a feature, not a bug, but we ultimately were missing out by not showing what drew those two writers together in the first place. Jennifer has worked on the dialogue so that the origins of their relationship can be heard underneath their arguments about poets and poetry, and now it’s time to sort through how this will work musically.

I’d also noticed that some of the instrumental textures needed to be cleared out so that the singers could have more direct support for their work onstage. The clip below shows the current form of an exchange between H.D. and her husband’s mistress –  a section that got streamlined during revisions last winter, which makes me optimistic about other revisions to come.

One of the mentors at the Duffy Institute warned us that making small changes throughout the piece would be complicated – pulling on a thread could wind up destroying the sweater. But I think the effort will be worth it; we just have to keep track of all the versions somehow in the process.

Revising the piece seems even more worth doing after I watched the “Director’s Cut” of Amadeus recently. This version is 3 hours long, 20 minutes longer than the theatrical release, and none of the additional 20 minutes helped the story. (It did make Salieri more evil, and so more one-sided. Mozart was simplified too, becoming even more of a brat than in the Best Picture version.) The added length here, which was actually the original cut, gets you more period costumes, longer descriptions of court maneuvering in Vienna, and apparently, something closer to the original play. The editing done back in 1984 for the theatrical release did away with the sometimes crude “explanations” behind each character’s actions. So the characters actually got more interesting to watch. You know, less is more.

(It’s harder to find the theatrical release now – the Director’s Cut is the one shown now at fundraisers and such.)

(We know, Salieri likes sweets. We get it. But it’s pretty?)

All of this recent thinking about the editing work ahead has been colored by the death of my main teacher from graduate school, Peter Westergaard. Peter always put clarity first: in his composing, in his writing about music, in his opera libretti and translations. He thought that talking about musical style was a waste of time (not specific enough about how a piece works, basically not serious), even though from my perspective he had a strong individual style himself. The piece below from 2007 uses the imitative counterpoint and rolling triplet rhythms that I recognize from many of his works, which some might call part of his style. His take would be that those elements made his melodic and harmonic moves more transparent, easier to hear. Part of being a good composer, not a stylist. And a good editor.