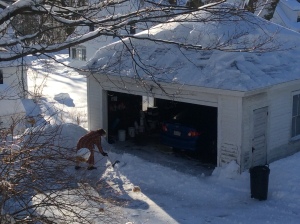 Even with all of the drama of this ongoing season (the Polar vortex! Thundersnow! Treated salt shortages! The Vortex again!) there have been some unexpected pleasures. Last week, I had the chance to play a piece that I hadn’t performed since December 1997 – Post hoc, ergo propter hoc, by Robert Ceely.  It’s a piece that was composed for me to play on my (then) new bass clarinet with-extension-down-to-low-C in 1989, and one that I played a lot in the late 80s around Boston on various new music concerts. Revisiting it for a concert arranged by Jason Belcher of solo works from the American Composers Alliance catalog, I discovered that a few things were really familiar, but a few phrases seemed quite different. So, I had to go back and rethink the piece some before putting the whole thing together again. It’s my favorite of Ceely’s pieces, and I think it holds up well lo these many years later. Even though you can tell that the score was notated with Professional Composer software.

Visiting the Ceelys in Boston before the New York concert, I brought along my bass and played the piece for Bob, showing off my iPad-footpedal combo for the page turns and all. (off topic – I was able to sort of help another performer with his iPad-ForScore deal in New Jersey earlier this month, when Blair McMillan played some of Davy’s etudes. Really, AirTurn manufacturers, everyone would be happier if they could tell when the footpedal was completed charged…)

When Ceely told me that I should play the piece “like a solo” I had to stop for a minute (I mean, it is a solo, what??) before I realized that he meant like a jazz solo. Which made sense, as a lot of the phrasing is focused on varied repetition, with a lot of syncopation built into the short fragments. In today’s bass clarinet rep, it probably comes across as conservative, since there’s not even one multiphonic or slap tongue to be heard. But it’s still sharp.

Ceely wanted to talk about other concerts around town, and movies that he should see, things that he could get to around town given his doctor’s permission. He still called me “Wieperson,” as he has done since 1984, and talked about eventually writing his autobiography Stairs of Sand. He wasn’t able to travel to NYC, but he did talk a bunch of people into attending in his stead, and many people came up to me afterwards saying how much they enjoyed the piece. And these were people that had to walk through sidewalks of slush and ice just to get to the venue, so that’s saying something.