Today was a day to take a work break – me from working on “Until the War is Over” (the chamber opera based on an H.D. novel) and Davy from “Dance Episodes” for the New England Philharmonic. So, we decided to do two things that required we be in a much larger town than Maynard, MA: 1) go to a U.S. Customs office, and 2) go to see the Joss Whedon Much Ado about Nothing movie. We decided, contrary to our usual direction, to go west in order to get these things done, and so wound up in Worcester for most of the day.

Worcester used to be our place, back in the early ’90’s. I was teaching, under various adjunct assignments, at Holy Cross and WPI, and we rented a house in the mainly rural Western suburbs. It’s a place that seems surrounded with reservoirs, and we ran into some of these today. 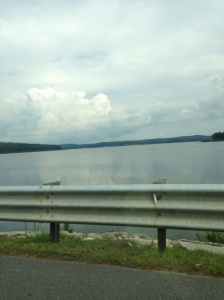 It’s also a place where you can actually park downtown, at least for a short time, making the Customs office thing very stress-free. I had to get a form that, while it does not prove that I own my bass clarinet, gives the impression that I will be bringing it back with me from abroad when I travel over the next few months. The bunch of us that will be part of the American-clarinet-professors-clarinet-choir at the big ClarinetFest this month were all warned about having this form, as some musicians have had trouble with European customs this summer when traveling with expensive instruments. Although, as Davy reminded me, my bass clarinet’s value, when applied to a violin, say, wouldn’t yield an instrument good enough to use at a competitive arts high school. However, now I have a stamped, signed, sort-of-official document that says people in high places believe that this Selmer D6404 bass clarinet is mine. So there.

We drove around the city as well, going places we hadn’t been in about ten years. Back in the day when we were looking into places to rent, Davy and I found this non-ironically cool restaurant “The Castle,” which was a pretty fancy place dressed up as an amusement park. Davy particularly liked his birthday there in 1990:

Even though that place is still there, we decided to look further east for our dining pleasure after the movie. (The movie was fine, although I kept thinking “wait, aren’t there way more speeches for Beatrice and Benedict in this? What’s missing here?  And how did I not remember “paper bullets of the brain”? And, yes, Joss Whedon’s house is very nice, but the best thing about it is the walk down to the water – used to good effect in the fake funeral scene. The music that Whedon wrote for the traditional songs – which I’ve had to set as well, for a UMaine production – were Sade-like.) So, we wound up going to a restaurant in Bolton that Davy found on Open Table, as he is very into accruing points.

So it was sort of a nostalgic day, with both commerce and culture intertwined. What if we had stayed “out west” in Massachusetts? We would certainly have kept using our canoe more….