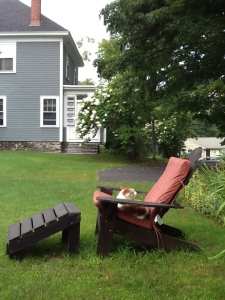 So, it’s  the last day of August. Cloudy and humid, and all of my bags are packed for a month in Ireland. Which I imagine will be greener than our regular lawn is – will report on that later.

Davy started teaching already this week, and has made (probably) one of the last brie-and tomato sandwiches of the year – although he did restock the tomato section of the fridge today at the Farmer’s market.

He was suckered into buying a tomato-specific kitchen aid earlier this week at Stop-and-Shop, a storage unit which I had deemed cute but-not-for-purchase. He overruled this decision, and has been able to use the device  with our regular tomatoes until today. 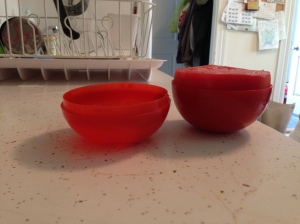 Farmer’s market tomatoes are indeed larger than the supermarket ideal.

A while back, one of my colleagues was getting ready to direct Into the Woods, and was telling me how excited he was about the project. “I mean,” he said, “this show has real depth – it’s not like The Pajama Game.”  Which I let go at the time, since I like the Sondheim work a lot myself. But I also like Pajama Game, and especially like its no-pretensions-here attitude. I think some of the “deep” Sondheim stuff gets credit for using  what is really cartoonish neurotic behavior as sophistication, at the expense of more realistic-but-still-funny recognizable stuff, like “friendship,” say. In Into the Woods the cartoon behavior works, since the characters are archetypes anyway, and they are allowed to be funny, not just sarcastic/wounded. It doesn’t have the standard late-20th-century this-is-important undercurrent to the humor.

The Pajama Game, while not as minute-to-minute effective as a bunch of other classic musicals (including one that shares a bunch of DNA with it, The Music Man), uses some comedy tropes really well. I think the female lead’s first number is well paced and silly in a good way, in line with a lot of Hammerstein numbers. I appreciate the chorus’s “obviously, naturally, definitely”  responses – pretty much the same thing as you’d find in lots of buddy-comedy songs.  Who doesn’t like musical banter?

It’s true that the whole show bogs down a bit, and the movie version in particular doesn’t show the later numbers to their best advantage, but still, the thing holds up way better than lots of message musicals or the more recent jukebox shows. I know that part of my affection for it is based on growing up with the cast recording, which was on a regular rotation in our house with other classic 50’s shows, for which I thank my mom. And it is funny for long stretches, featuring mainly gentle ribbing. It is not trying to address the ills of all the world – so, I guess it’s not deep, but that’s OK.

You don’t see the classic musical comedy banter too much in art song venues, which probably comes from a combination of historical tendencies and solo singer recital preferences. Sometimes when one of my own humorous songs is programmed on a formal recital, the performers can be uncomfortable with it, not wanting to seem silly. Plus, the audience members are not sure whether or not they can laugh. (This usually takes of itself if the audience has the texts to the songs in front of them – then they can see for themselves if they really heard a joke.)  Just last week some other colleagues performed a song cycle of mine on texts by Sarah Manguso. Parts of it are really comic, no kidding (so to speak). They’ve sung this a few times now, and so are completely OK with selling the jokes that are woven into some serious texts:

So, I’m hoping that the upcoming movie of Into the Woods is very funny in addition to having depth, as my director friend would say. I’m cautiously optimistic, given the basic gentle humor between the characters I’ve seen in stage productions. But then, there was that awful movie of A Little Night Music which had no comedy whatsoever.

On a short trip up Route 100 today, we passed a sign that said “Art of Humor Gallery – next right.”  It seems like it’s a real thing. 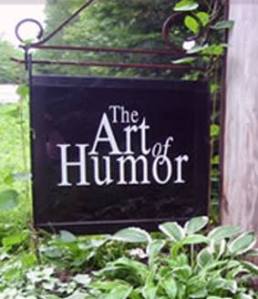 This seems very promising – a whole gallery for the Art of Humor! ..and the Vermont artist that shows there seems very much into the gentle-comedy idea…

So, I have just returned from the massive International Clarinet Association’s ClarinetFest (I think that’s supposed to have a “registered trademark” thing there, but hey) in Assisi, Italy. My husband warned me that, not only would it not be raining anytime that week in Umbria, but that it would be around 100°F most of the time.  I was worried about having to check my bass clarinet on the plane, since I’d committed to playing in the 30-piece American Professors Clarinet Choir at the end of the festival, and therefore had to choose between lugging my very-heavy-but-reliable-for-airlines case or the new, fancy lightweight BAM case. Went with heavy case. Very sorry. (No, no, the instrument is fine, but I had to carry the thing around a festival built into a hill, with stairways to all venues. Stairs like this: 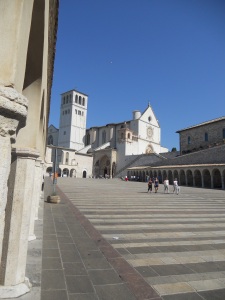 The cool thing is that I was far from alone in this undertaking. There were lots of bass clarinet players, all happily carting their instruments around just for the chance to play. 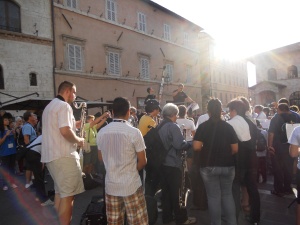 True, many of them did have the ultralight cases, and/or had somehow talked their airlines into not checking their low-C-extension instruments, but more power to them. In my informal survey, I got to see lots of options for transporting these things. Plus, heard much awesome bass clarinet playing, in particular from multiphonic expert Sarah Watts and Barbara Haney.

Of course, at a festival like this with 6 events going on simultaneously every hour, the choices you make from the program to tend to influence your general takeway from the whole week. Since I’m me, and choose to go to many events with electronic components and/or longer clarinets, I had a specific sense of “wow, there’s lots of people that play bass clarinet regularly now.” At least, compared to what I’ve seen at more regional events in my northern New England driving. Which may not be the best comparison to an international festival, granted.

And it’s also possible that those that choose a different path through the festival offerings would have a different impression – maybe that clarinet quartets are suddenly a big deal (I did hear some of the quartets, and was impressed by those as well – and, coincidentally, you do need a good bass player to get one of these quartets working well.)

It was pretty fun to play in the clarinet choir at the end of the week, especially to sit next to 6 other bass clarinets all playing together. Although it was 103° at the concert. This was taken at the dress rehearsal, before we were desperate for air conditioning.

Now, I get to practice for the SCI/Parma Festival in Portsmouth, NH, where I’ll play a new-to-me bass clarinet and tape piece (by Martin Gendelman – my own piece on the festival doesn’t have clarinet in it this time..) in two weeks. Got to make the slap tonguing slappier.