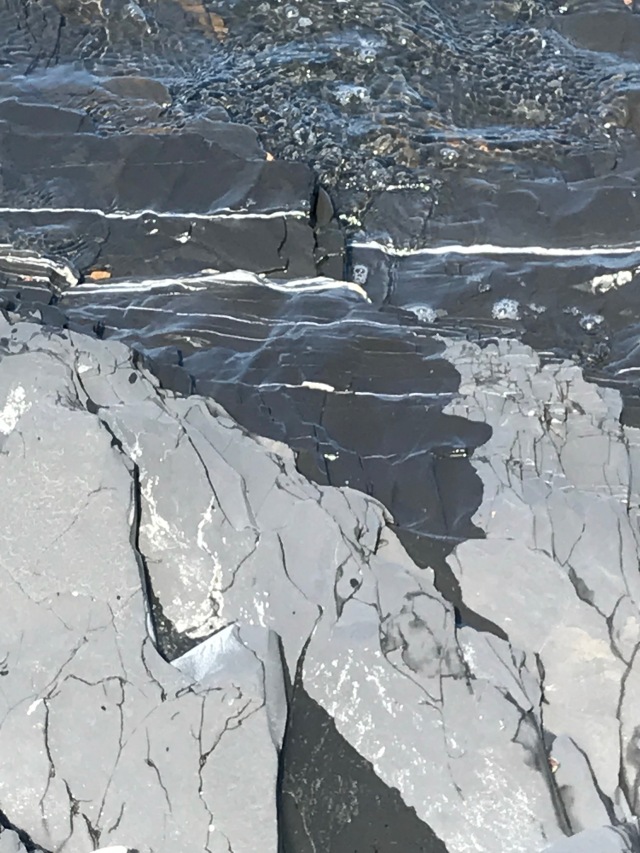 Summertime, when the living is at least partly composing..

When I told Davy I was working on a blog post about my newly finished piece, he said “You can call it ‘Rock Music,’ hehehe” (insert Elmer Fudd laugh here). Which I rejected as too on the nose.

It’s a piece for wind ensemble and video, written for the UMaine Symphonic Band upcoming season, and yes, it’s called Slate. And features lots of pictures of slate, movies of splitting slate, slate used for walls, roofs, etc. All kinds of slate (and shale, to be precise).

I realize that just using the word is borderline too trendy. There’s a new home décor store called Slate in Burlington, the town where we spend some summer composing time; there’s the established online magazine, a software program, a network for cryptocurrency, a roadbike model (with a “custom lefty fork”), and a MVMT-brand watch. A lot of people like this word, and the image/style it implies, and so do I.

We surrounded by the stuff here in the Vermont place, with walls and walkways that Dad built around the house all using slate, and the beach pretty much covered in skippable slate pieces that extend out under the lakeshore. When people have visited us in the past, some have actually suggested that I need to use the images around here in a piece, and this summer it finally happened.

I started with the idea of using the various definitions of the rock, and was going to incorporate the actual text in the piece, but eventually decided that would take away from the band’s performance. But the definitions certainly wound up organizing the piece into sections, so that showing slate “in use” were contrasted with slate in nature, or slate “up close.” The basic definition, noun only, usually lists the following elements:

a flat piece of slate used as roofing material.

a flat piece of slate used for writing on, typically framed in wood, formerly used in schools.

a board showing the identifying details of a take of a motion picture, which is held in front of the camera at its beginning and end.

a small portable computer that accepts input directly onto its screen rather than via a keyboard or mouse; a tablet computer.

a list of candidates for election to a post or office, typically a group sharing a set of political views.

a range of something offered.

Some definitions wound up being too specific for an impressionistic piece, so the election slate and the blackboard slate got eliminated pretty quickly. What wound up staying was relatively stately, and this will be especially so when it’s performed at the Collins Center this year in Orono. There will be a large screen above the band, so the slate pieces will be suspended above the players in slowly moving images, almost as a procession.

Obviously, it hasn’t been played yet – I’m working on the parts for the players now. But I made the director, Chris White, a demo of the piece using midi to replace the band (not ideal, true, but potentially helpful). Here’s the opening, using a mix of electronic and fake-wind ensemble sounds.

No splitting rocks in this section – that’s for when the lower brass take over. Hehehe.